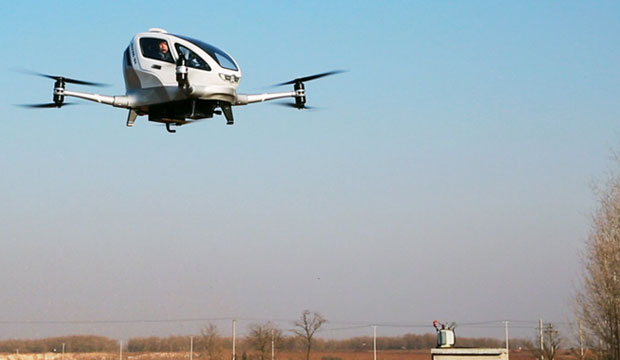 this week released footage of the latest test flights of its EHang 184 personal Autonomous Aerial Vehicle.

The EHang 184 can transport a single person at up to 130kph in Force 7 typhoon conditions, the company said.
EHang plans to further improve the passenger experience and add an optional manual control so passengers with piloting experience can operate the AAV manually.

It also has developed and tested a two-seater craft that can carry up to 280kg.

The EHang 184's Specs
EHang earlier this year announced the following specs for the 184:

Automated flight, through a C&C Center;
Multiple backups for all flight systems, which would take over seamlessly in the event of failure;
A fail-safe system that automatically would evaluate the damage if any components were to malfunction or if there were damage in-flight, and determine whether the AAV should land to ensure passenger safety;
Multiple sets of sensors for the flight control systems to provide a constant stream of real time data;
Multiple independent flight control systems that automatically would plot the fastest and safest route;
Encrypted communications systems;
Vertical takeoff and landing;
Foldable design, making the AAV is no larger than a consumer car;
100 percent battery operated;
Tablet console for passengers to input commands;
Built-in air conditioner;
LTE network;
Weight -- 260kg;
Flight speed -- 100kph;
Cruising altitude -- 500m;
Cruising duration above sea level -- 25 minutes;
Battery charging time -- 1 hour; and
Rated payload -- 100kg
The EHang 184 has eight propellers on four arms, with each arm having one prop above and one below.

Battery Technology
"The power needed to lift and hold a vehicle in the air massively reduces [a drone's] effective flying distance," noted Rob Enderle, principal analyst at the Enderle Group.

"Until this power problem is addressed, flying drones will be more of a technology showcase than effective transportation," he told TechNewsWorld.

However, "it will eventually be addressed," he said, and "the economics of flight will force a reasonably rapid change."

Some drone makers are experimenting with hybrids running on both electricity and gasoline or diesel.

There are other issues with battery-powered flight, though, such as the possibility of a catastrophic battery failure, said Michael Jude, research manager at Stratecast/Frost & Sullivan.

Very hot or burning vehicles falling out of the sky could cause a lot of damage, he told TechNewsWorld.

Problems With Props
The EHang 184 looks like a giant drone with four propellers -- and that itself is problematic.

"No aviation authority is going to approve the use of a drone taxi that has four spinning propellers at waist height when it lands," said Michael Blades, research director for aerospace and defense at Frost & Sullivan.

"At a minimum, those props would need to be shielded by some sort of duct," he told TechNewsWorld.

Perhaps that's why Dubai -- which had run tests with the EHang 184 and reportedly planned to launch a flying taxi fleet using it last summer -- later in the year began testing the Volocopter drone.

The Volocopter has 18 props on a hoop situated above the cabin.

"If you look at the Volocopter design, all the lifting props are overhead like a normal helicopter," Blades remarked. "Winning designs will maximize safety to passengers as they embark and disembark."

The Future for Flying Taxis
Several other companies, including Uber, Boeing, Airbus, and Joby Aviation, have been developing drones for use as flying taxis.

"The technology will likely gain widespread adoption some day, but not as soon as the hypesters would want you to believe," Blades remarked.

"Very rich, developing nations like the UAE would deploy something like this first," Jude suggested. It would likely "remain a niche service, possibly for transport to and from airports, or for emergency response."